You Reap What You Sow

Having been around for centuries, Seiryuu is overall a very laidback but serious man with a strong sense of honor. Seiryuu himself states that he has "seen it all" and not much else surprises him anymore. However, his personality can quickly shift to being very aggressive especially when he or anyone close to him is being threatened and isn't afraid to fight that person to the death. This is especially true for the World Government whom he has hated as long he could remember because of what they did to him and his family many years ago. As such, he would protect anything and anyone from the World Government that is threatening them when he can.

Seiryuu also has a unique trait that he refers to every other person he encounters by terms that usually refer to someone young (such as child, kid, or even pup to the much younger generation_ considering he is one of the oldest living people on the planet. He will often refer to them as such until they are able to earn his respect in a way. Only a few species he never refers to as "child" are Giants and people he already sees as strong individuals (such as any Fleet Admirals, the Yonko, etc.) Seiryuu also often refers to others he fights with nicknames that usually fit on who they are or what their powers are (like with Fermi, he calls him "Gamma Fox") and will often taunt his opponents in battle.

"The World Government is Justice? The World Nobles rule are absolute? What nonsense! I've lived a long time and I can tell their views of Justice hasn't changed a damn bit! They're pathetic claims that everything they do is right and always hide up their mistakes when they're wrong just shows you how cowardly they are!"
—Seiryuu's overall view over the World Government.

Seiryuu also despises the World Nobles more than any person due to them in the past enslaving himself and his father in his youth. He often refers to them as the "World's Filth" as he really believes they are below everyone to due to their behavior. Seiryuu himself says that just mentioning a World Noble's name is enough for him to boil inside but has trained himself to keep on a calm face especially toward others.[1]

"For 40 long years I have been a slave for those bastards. I was forced to endure years of torture. I have been whipped, spat it, slapped, burned, thrown stones at, electrocuted, and even rode around for all of that time. They only fed me a rotten apple once a day saying that find of filth is "worthy" for filth like me. And I have been doing so since I was only 12. My father, no, he got the worse of it. They painfully experimented on him knowing of his bone powers... They knew he doesn't age with them and decided to make him their "Immortal Slave." That all drove him to his death and my hatred of those disgusting World Nobles. I'll make it my mission to destroy any slave shop that dares show itself in my face. That is a promise..."
—Seiryuu explaining how against slavery he is.

Because of what happened during most of his early life, Seiryuu despises the concept of slavery in general. He hates the idea of people being forced to do tasks against their will and being abused and assaulted on a daily bases. Seiryuu himself would personally free any slaves that are in his sight and destroy and slave shop he comes across. Being a slave has traumatized Seiryuu but he always puts on a brave face around others to not let them know how unnerved by them he is. He will also take any slaves in and build them up to becoming part of his massive army. Although anyone, Navy, Pirate, even ally, that dares mention that term to him will be met on the recieving end of his brutality.

Seiryuu often stated that he is forever haunted by dreams of what happened with himself and his father all those years ago. However, Seiryuu describes this as a "blessing and a curse" as since while the dreams always remind him of his awful past, it's those dreams that keeps his motivation going to take down the Nobles and the World Government as a whole.

Brutality and Love of Fighting

"Ever heard of that bastard that causally claims the lives of our beloved World Nobles? The man that will destroy islands without a second though? That man is Angrboda D. Seiryuu and his brutality knows no bounds. That man loves a good fight and nothing more. If you are someone strong and dare not to fight him, he will go after your love ones if you have any. Not to mention how le loves to break down those on a mental level as well. This man can strike the fear into nearly any pirate that comes across him. This man isn't a monster, he's a demon."
—Fermi describing Seiryuu's savage and bloodlust nature.

Seiryuu, as described above by Fermi as well, can be a very hostile and violent pirate that strikes fear into the people, Marines, and even other pirates alike. Often times whenever Seiryuu sees a strong opponent that has potential to give him a good fight, he will rush in and fight that individual. It is often one of the reasons he likes challenging Fermi and other Admiral-level opponents. He also was more than happy to fight Tatsuya Ryushiki when he first joined the Dead End Pirates and even later claimed she is even stronger than Rooke himself who was a man that Seiryuu grew to dislike. Whenever Seiryuu is fighting a very strong opponent that is actually giving him a hard time in battle, Seiryuu will enter a state where he grows even more bloodthirty itching to take down his opponent. Seiryuu himself stated that this isn't a trait he was born with or anything but something that developed more from his years of a slave and other things that cause him to show enjoyment when fighting strong opponents. This was best shown during his fights with Fermi saying the Admiral was one of his strongest opponents to date and even that his powers are tricky for him to deal with due to their nature.[2]

"When you're strong, you can do anything! Power is the best damn thing in the world to have because, with it, you have control over what you want in life. Those that do not believe in their own strength and think they can get better in life by either relying on their own men too much or even try to take the easy way out are trash! This also extends to having a good influence over others! Might makes right!"
—Seiryuu's view of strength. 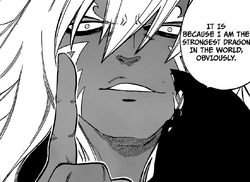 If there is one thing that Seiryuu values more than anything, is strength. Seiryuu believes that when one is strong, they can do anything. This includes physical strength and sheer influence over others. Seiryuu stated that he got this trait from both of his parents: the view of strength by raw power from his father and the view of strength over being a good ruler and having enough influence from his mother. Seiryuu stated that having these two traits is what kept him going as a slave for over 40 years before breaking out. Seiryuu's views also extend toward others that he does see worthy to face him as seen when he fought Maneki for the title of "World's Strongest Angrboda" saying she is at least the "second strongest." However, any of those that doesn't show much strength and rely on other sources other than themselves, Seiryuu looks down upon. This was best shown when, during his time on the Dead End Pirates, Seiryuu's respect for Rooke dissipated when he saw the self-proclaimed island conqueror only go after small name islands and even fled from an army of Marines instead of fighting them.

Retrieved from "https://onepiecefanon.fandom.com/wiki/Angrboda_D._Seiryuu/Personality_and_Relationships?oldid=62784"
Community content is available under CC-BY-SA unless otherwise noted.