Start a Wiki
Brigit is part of the 3rd division of the Imperial Dragon Pirates. She is the daughter of a former-marine and a scholar from Ohara island. Earning the name "Red Princess", close friends with and possibly love interest Ryuka Hanichi,

Brigit is known for her shoulder-length red hair and red corset strapped around her small waist, the upper area of her ample breasts are exposed along with her shoulders fromt he loose sleeves. Curved body, wearing a red had and garment to match.

Brigit is very cunning, intelligent and brave when in battle. She takes her opponents serious if they are strong and normally fights alongside with Ryuka as they are known to be work together very well as a team. Brigit is eager to learn about the Imperial Dragons' empire and its history connected to the Void Century over how and why it is considered dangerous for the World Government to hide away from the world, seeing it as foolish and could be important to know if anything that happened 700 years ago could happen again one day in the possibly near future.

Like all of her fellow crewmates, Brigit despises the Wraith Pirates and the founding members such as the famous Ox Lord Kahn Tibus who betrayed them and seeking out the ancient weapons to start a new war.

She wields a sword and very skilled for a swordswoman.

Brigit was a daughter of a former marine who defected from the government in their corrupted goal for "justice", married her mother who was a historian and raised Brigit on Ohara as they became interested in the Void Century. She met and befriend a young girl named Robin, unlike others she did not see her as a 'freak'. 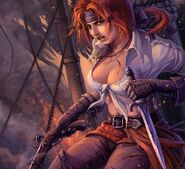 Add a photo to this gallery
Retrieved from "https://onepiecefanon.fandom.com/wiki/Brigit?oldid=27151"
Community content is available under CC-BY-SA unless otherwise noted.