David D. Jones(デビッド·D·ジョーンズ, "Deibido Dii Jounzu"), more commonly referred to simply as, "Davy Jones" or "Davy", is the elder brother of Gol D. Roger and the Uncle of the late Portgas D. Ace. He is mentioned in name and name alone in a Journal that was passed on to The Strawhat Pirates by Shanks and the Red-hair pirates. He was seemingly captured in a picture alongside Rayleigh and Roger, but his part of the picture was torn away and destroyed, so there is nobody left that knows his physical appearance.

Davy is a former member of the Roger Pirates, and due to remaining more or less unheard of in contrast to his younger twin brother, Davy has become a myth and a legend. Very few people in the world actually believe that Davy is a real person, and even fewer have heard of him. There are only very few people, mostly of high status in the world that have any knowledge of Davy. For some reason knowledge of him has been kept in secret, but it has been said by Law that Davy is the the one that knows "The True Secret of The One Piece Treasure" which is a fact that Roger didn't even tell Rayleigh about. Davy also wears a strawhat, but unlike his twin brother, he did not pass it on, and kept it as a keepsake as he aged.

Nearly nobody knows of Davy's current appearance. He can be assumed to be on the same age-level as Silvers Rayleigh due to being roughly the same age as the latter. In his youth, Davy appeared very similar to his younger brother Roger, which is only natural given the fact that they were twins. Davy can be described as "The Portgas D. Ace to Rogers Monkey D. Luffy" in the sense that both duo's are similar in appearance. Davy is also noticeably taller than his brother, standing head and shoulders over Roger. He was also noted as being somewhat more muscular than his brother, with broader shoulders and a wider chest. It is stated by law that according to legend, depending on what "Form" he was in, Davy's physical appearance could change greatly. 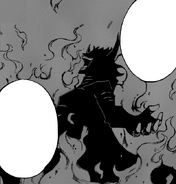 A monstrous depiction of Davy

It is not known what Davy is like nowadays, but during the days of his prime, with the Roger pirates alongside his brother and Silvers Rayleigh, he was described as more toned-down version of his brother. He was coolheaded and the voice of reason in the crew, and often did most of the thinking for the entire group. He was admired by many of the crew and looked up to, as he and roger, in spite of the slight differences in age and height, were viewed as "absolute equals" in the eyes of their shipmates. Davy could also be very hotblooded, and had a great sense of justice, honor, and friendship, the likes of which Ralyeigh said that only Luffy equated to in all his years. Davy, was not black and white at all. He new well of the worlds hardships, and was very wise and insightful.

While it is not exactly clear if they were blood related(as well as the massive differences in their names) it has been made clear that Roger and Davy shared a bond in which transcended anything being related by birth could offer. They were connected in spirit, and as such they were always with one another. Their relationship started out heavily similar to that of Ace's and Luffy's. They were with one another from seemingly the moment of their birth, and together the forged an infamy as a duo. Davy and Roger full acknowledged one another as the others brother, as did luffy in reference to ace. They were inseperable when together, they inspired awe and bewitched the members of their crew. It was as literally as though, one was the other half of the other, and together they became whole, and as such, were an unbeatable force. However, they also shared a healthy rivalry.

Davy and Roger were in constant, endless competition with one another, constantly viewing the other as an obstacle, a goal, a force that needed to be overcome in order for they themselves to become more powerful. This ultimately caused them to gain the infamy of "ultimate equals" throughout the world, even if they themselves did not acknowledge or agree with the title. Everyday they would train in attempt to become more powerful than the other, and this lead to bouts of strength every now and then between the two.

Being the mirror to his brother, it isn't an odd fact that Davy posessed monstrous and uncontested strength. His power was insane to the point it could only be opposed by his brother, and Edward Newgate. There is a legendary battle that has gone down in history regarding Davy, in that he was the one who first engaged Edward in battle, before his brother. In this encounter it is said that the entire world felt the aftershocks of their fighting(not implied to be solely because of the Gura Gura no Mi). During this battle, Davy had shown himself powerful enough to contend equally with a prime, fully healthy Whitebeard.