OnePiece Fanon Wiki
Register
Don't have an account?
Sign In
Advertisement
in: KamiGuru, One Piece X, Females,
and 3 more

View source
This article, Himawari, belongs to the One Piece X timeline and follows its rules and expected standards. Please be advised, it's not involved in the Fanon Canon storyline.

Mythical Zoan
Himawari of the Undead[3] is the captain of the Undead Pirates, a Shichibukai with a frozen bounty of

Despite demented personality, Himawari stands as the paragon of beauty and femininity; her beautiful appearance was primarily the reason why Alucard selected her over some of the other Kuja. Many have acknowledge that her beauty is the primary reason they've devoted themselves to her. Although she is outlandishly large, many have attributed her blasphemous size to traits of a deity. When assessed by the crew's infamous pervert, she supposedly has the perfect proportions given her size. And due to her de-accelerated aging process, she has maintained her youthful appearance despite her old age.

In addition to her stunning physique, Himawari possesses many unorthodox yet appealing characteristics. She has long straight blonde hair that glistens in the light with long, voluminous eyelashes and pale skin with a slight blush shrouding over it. Her eyes are golden and despite the many captivating features, are regarded as her most appealing trait. In unison with her subjugation powers, she can lure almost anyone with sexual interest to adore her upon making eyes contact.

Befitting for an empress, Himawari towers over most with her natural height being over sixteen feet. Along with her unnatural size, her body is toned yet does she does not lose any of her curves as a result; most likely due to her Kuja heriatge. Regarded as her most unappealing trait, though a popular fetish for some, Himawari's ears are shaped as if she were an elf, with her helix having grown sharp and protruding outward.

As if to emphasize her feminine qualities, she is clothed in a wet-designed, figure-hugging dress covered in her favorite color; blood red. From the top, this dress barely covers her voluptuous figure, almost demanding those to stare at her breasts. Additionally, Himawari wears long white arm sleeves that cover hand and reaches beyond her elbows. Himawari is often seen with her signature blade in hand. She also tends to change her feet apparel on any given occasion., although she prefers heels as it is more entertaining for her to crush false suits with the former versus flats.

Although Himawari stands as the pinnacle of female beauty, due to near demonic tendencies, Himawari can be quite intimidating. When she deems a party unworthy of being a proper suitor, her eyes can turn cold and less welcoming, befitting her demented mindset. This look has been named "The Death Stare" as once she makes it, whoever she's glancing upon ultimately dies. 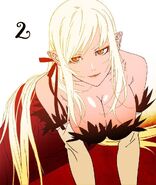 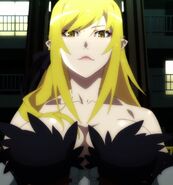