The Sky's the Limit

Hoode D. Jenny is the captain of the Red Pirates. She is one of a few survivors of a werewolf clan in the Kingdom of Hearts. That event is known as the Harty Massacre. During that massacre,a grandmother taken her into her care,and Jenny would live with her until she was 12 years old,as another werewolf would kill the grandmother. She would then be taken custody by the werewolf until she was 20,when she found out the truth about her heritage. She's been on the prowl as a pirate for a few years now in paradise.

As a captain,she also has wolves as her pets. She has Cerberus,Axel,Argos,Hex,and Shuck. She also leads a pirate crew that consists of werewolves and other species of men.

Jenny is a very tall woman as she stands over 10 feet tall. She has long blonde hair that comes out of her favorite red hooded cape. She has green eyes, but turn into red when she is in werewolf form. She likes to wear a red or white dress which she'd wear either red or brown leather boots with. She also likes to wear a white bra with a short brown corset, which she'd wear a red mini-skirt with brown tights. As a werewolf, she is even taller standing at a near 20 feet. She has gray fur, and has very sharp claws.

She is equipped with a chain whip that extends over 300 feet away. She uses this quite often against enemies that are around her, and it assists her being able to take out large crowds of enemies. She carries a flint that inflames the whip when she strikes it; Giving her a fire chain whip that can give burning damage to her opponents.

24 years ago from the current storyline, Rott D. Jenny was born in the Kingdom of Hearts in the East Blue, born to a secret family of werewolves in the island. The family and other families migrated to this island in search of peace and acceptance, though they were not received well at all. Especially when they were feared to eat people in the island or were feared for them wanting to eat their animals.

20 years before, the Kingdom of Hearts asks for help in eliminating the werewolves in the island. So Cipher Pol 1 comes in and answers the call and does a complete assassination on the little village that the werewolves lived in. The Village of Harty was burned to the ground, with humans and werewolves in it alike. Werewolves tried to save the humans, but were instantly killed by some of the residents or by Cipher Pol. No werewolf tried to attack Cipher Pol or the humans, most actually ran into the woods before they were killed in the woods by silver bullets that Cipher Pol had.

4 year old Jenny would see her parents be shot down by Cipher Pol Agents right in front of her. But was then picked up by a werewolf that carried her into the forests as the bodies of Jenny's parents were laying on the ground before being burnt by the fire Cipher Pol caused.

Soon the werewolf couldn't run no more from the cipher pol agents and decides to stuff Jenny into a tree, forcing Jenny to eat a watermelon to keep Jenny's mouth shut. The werewolf would run away before being shot down by Cipher Pol Agents. Jenny's tears muffled as she kept making herself eat the large watermelon in front of her. The sight of her village and home burned down ingrained into her.

Many days later, Jenny was seen wondering around the forests in search of haven. And she stumbles by an old woman's house that had the smell of fresh homemade apple pie and carrot cake. The old woman would see Jenny in her backyard and would retrieve Jenny into her house. The old lady realized that the young Jenny was from the village nearby that got burned down to the ground. The lady thought it was an accidental fire as it was reported, without actually knowing it was a fire caused by Cipher Pol. The Old Lady would decide to take care of Jenny despite her old age.

The old lady would give Jenny a red hooded cape days later to help Jenny get some clothes. This gave Jenny happiness as she was trying to recover from the death of her parents. Jenny and the grandmother would have a happy relationship for a long time, Jenny willingly doing chores around the small house as the grandmother did a lot of cooking and baking. Jenny soon almost forgot she was a werewolf herself as she lived with grandmother.

At the age of 12, Jenny would come home at night to a sight of blood everywhere. She was coming back from the market that was packed at the time, and she couldn't come back until it was close to midnight. When she came back, she finds the grandmother dead in the bed, with her guts all over the room. Inside the house was a werewolf ravaging the house, who soon detected Jenny's presence and nearly killed Jenny. Jenny was about to be killed until the werewolf smelled the werewolf blood in Jenny, so the werewolf takes Jenny away from the home and goes into hiding with Jenny.

The werewolf takes Jenny off of the island during the day to get away from the Kingdom of Hearts and they soon travel for the Grand Line, taking Jenny far away from her home. They'd make stops on their boat along the way for the werewolf to cause large panic among the east blue. "Ravaging" Roald was the werewolf's name, he was a pirate/bounty hunter that did whatever he wanted, and was seeking to earn the position of shichibukai. Soon after a reign of terror throughout the east blue was completed by the Ravaging Roald, Roald would take him and Jenny into the Grand Line in search of more victims to take out, either civilian, pirate, or marine.

Jenny was forced to be in the small crew Roald had, and was forced to be a cook and tailor for the gang of werewolves. Jenny was sexually abused and raped throughout the time with Roald's crew. And she couldn't do anything about it but cry and make it thought hopeless. She tried to remember the good times she had with the old grandmother, so there could be some hope in herself yet.

There were times Roald would train Jenny in using a whip, in case the crew's pet wolves would get out of line. Which Roald had a chain whip of his own that he'd use beside a sword. Jenny would mostly teach herself to use it since a lot of times she would accidently hurt herself with the whip instead of hitting the dogs. These pet wolves were abnormally large, and were not very friendly to anyone except Jenny strangely, which is why Roald would have Jenny take care of the wolves most of the time.

Suddenly, Jenny was 18, and it was her "Day of Awakening". Roald didn't know how old Jenny was at all, never asked how old Jenny was either. So surprisingly one night, Jenny transformed into her werewolf form right before Roald and his crew's eyes. She grew to a near 20 feet and had the rage of a bull. All the hidden rage of the burning of her village, the death of her grandmother, and the years of sexual assault and raped and being forced to live with the crew all came out on that night. She immediately jumps at the crew and kills every single werewolf in the crew. Even the Ravaging Roald, who has done a terror to the people in the East Blue and Paradise, didn't survive the night.

Jenny would wake up in the stable of the ship, with the five big wolves around her. Jenny would realize she had her first night of transformation as she saw all the blood spilt on the ship, and all the dead bodies in front of her. She soon realized she'd have to leave the ship before anyone finds out it was her. So she grabs what she had left, and her red hooded cloak, and leaves the ship. But the five wolves decide to follow Jenny and leave the ship with her as she became the leader to them.

The Formation of the Red Pirates

It was a few months after that, that Jenny soon meets the start of her crew. She was having trouble adjusting to having her night disrupted by becoming a werewolf. And it was often she'd scare off a village full of people, and kill a lot of people uncontrollably. Though she would always run away in her famous red cloak.

One day, Jenny and the dogs were surrounded and trapped by marines, and were about to arrest her until a man in a green hood saved her with a bunch of arrows piercing at the marines. A man that was even taller than Jenny jumps out of the trees and looks at Jenny. Turns out the man was known as Little John, and was a werewolf himself. Little John was a pirate for another crew known as the Merry Pirates. He ended up being swept away from his crew in a storm, and ended up in the island they were standing on.

Jenny and John decide to travel together with the dogs. John being a more experienced werewolf, decides to teach Jenny over the years to control her werewolf form. And after many months of training and challenges, Jenny was able to control most of her werewolf powers. They travelled together for about 4 years until the two would get married and decided to make themselves their own pirate crew.

Jenny and John got married as they were the only two they had, Jenny hasn't had a friend since her grandmother and John had been stuck in that island for years until Jenny came along. Soon, they found they had romantic interests in each other and decided to marry and become a pirate couple.

2 years to the current storyline, Jenny and John recruit another werewolf known as Gunsmoke Jaden. He was a metahuman werewolf from the Gunsmoke Family that was thrown away from the family because he was bitten by a werewolf. He ended up in a martial arts school that eventually was put on fire by enemies of his teacher. Jaden makes it a goal that he'd find who burned his school down and take him or her down.

Not too long after that, Jenny recruits a human named Alcatraz Jeremiah. Who was an assassin that tried to murder the werewolves but failed miserably. Soon, he was seemed pitiful to kill but he proved himself useful in the island they were in as they were attacked by bounty hunters as well. Soon, Jenny had the interest for Jeremiah and convinced him to join her crew as a gunner.

About a year before the storyline; Jenny recruits a kitsune humink named Lotus, who became a navigator for the crew. She was a humink who was looking for something else to do beside being a tailor and sewing the local clothes. So Jenny asked Lotus if she'd come with the crew and Lotus accepted.

After that, the crew decides to give themselves the name of the Red Pirates. After it was known that Jenny likes to wear her red hood and Jaden and Jeremiah wore red mostly. And then there was the fact that Jenny, John, and Jaden were werewolves that did leave a trail of blood behind. So the crew felt it was appropriate to call themselves the Red Pirates and they started sailing as an organized crew! 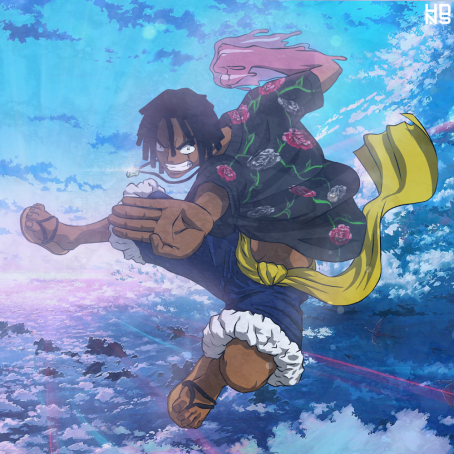