Start a Wiki
"Hi everyone! Kasei here, and this article isn't done yet! I'll be getting back to this as soon as possible!"

Sigfried is a Pirate Captain, former Prince of the Kingdom of Fields (Real Name unknown). He is one of many Pirates that sails the New World, commanding a small fleet of ships called The Grand Sea Pirates, and has been a thorn in the side of the World Government for some time. 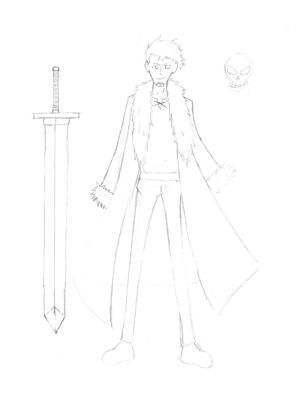 Sigfried is a generally laid-back man who seems to take everything in stride. Little bothers him and he is intimidated by virtually nothing. Sigfried has shown that he is more than capable of dealing with one of the Seven Warlords of the Sea with little effort, and even being confronted by a Marine Admiral did little to deter Sigfried.

However, Sigfried shows an absolute hatred for the World Government, thanks to their atrocities. He openly declares war against them and shows no remorse for their officers. During the Island Panic incident, Sigfried occupied himself with destroying as many World Government ships as possible to prevent their escape.

Sigfried gets along well with his crew members. He shows them each a lot of respect and treats them well. However, he does not spoil crew mates, and makes it clear that if one of his crew causes a problem, he expects them to finish it. On the other hand, Sigfried is known to spend months hunting down and killing those who murder his crew members.

Sigfried initially attempted to take Whitebeard's head, but even with his Logia-class fruit, this was an impossibility. Without even scratching the man, Sigfried was defeated. He has since gained a lot of respect for Whitebeard and heeded the man's call to war. When Whitebeard was killed, Sigfried was one of many who wept.

With the Straw Hat Pirates

Sigfried has had little interaction with the Straw Hats, but he does show respect for their captain, Luffy, for all he had done. He noted Luffy's determination and drive, saying that it made him feel that the Straw Hat Captain was "A new bit of hope for the world".

As a new world pirate and captain of the Grand Sea Pirates, Sigfreid is repeatedly referred to as a strong pirate. He is known to have a rivalry of sorts with Kizaru of the marines, as the two clash constantly. Being able to stand up to, and defeat, a marine admiral is noted to be an extremely difficult task.

Sigfreid used to bring a large katana into battle, and showed proficiency in its' use. During the Whitebeard War, however, this sword was destroyed by Admiral Kizaru.

After the two-year skip, Sigfreid uses an even larger blade, though he has not been seen using it.

Sigfreid is known to have Haki, having used it on Kizaru during the Whitebeard War.

Sigfried ate the Ene Ene no Mi, a Logia-class devil fruit that allows him to create, become, and control pure energy. The fruit's properties are similar in function to Kizaru's.

Retrieved from "https://onepiecefanon.fandom.com/wiki/Sigfreid?oldid=19462"
Community content is available under CC-BY-SA unless otherwise noted.