OnePiece Fanon Wiki
Register
Don't have an account?
Sign In
Advertisement
in: Pages with reference errors, One Piece X, KamiGuru,
and 10 more

Paramecia
"Warrior of the Sea" Sora Daisuke[4] recently deemed the "World's Worst Criminal" by the World Government, is the Chancellor of the United Federation — an alternative government designed to inspire real change in the world. Although he claims he does not seek to overthrow the World Government as most revolutionary armies, his primary objective create a new more functional society and abolish the many systems upheld and implemented by the global regime. His many associates now refer to him as The Godfather.

Daisuke once served as powerful marine vice admiral operating under the alias Kiwashi.[2][1] Due to his decades of service along with his highly regarded belief in heroic justice, Daisuke was appropriately named and was renowned worldwide as the Hero of the Marines.[3] Daisuke's name is attached to the demise of both the Pirate King Gol D. Roger and the Strongest Creature Donk E. Kong.

He is the patriarch of the famous Sora Family —a very large pedigree that serves in multiple World Government organizations. His name is synonymous with the successful comic strip Sora, Warrior of the Sea as the main character is heavily based on him and his years of service. Due to his own actions along with his fictional portrayal, he serves as a symbol of justice.

Daisuke serves as the author's primary antagonist in the One Piece X storyline, being the impetus of the majority of the narrative's events. 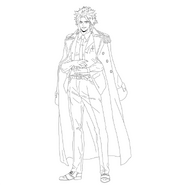 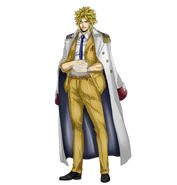