Suzaku Tokai is a member of the Imperial Dragon Pirates after Chau peng island was almost destroyed by the Marines for harboring historians of the Void Century. To thank them of protecting his home he joined their crew to rebel against the World Government.

He is normal size, athletic built, short dark green hair with silver hihglight. Wearings a black jacket with a white furred hood and a red shirt underneath

Mostly calm and relaxed but in battle he would become very serious. Shows great potential of fighting alongside with his crewment. 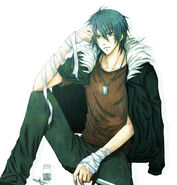 Add a photo to this gallery
Retrieved from "https://onepiecefanon.fandom.com/wiki/Suzaku_Tokai?oldid=21078"
Community content is available under CC-BY-SA unless otherwise noted.