The fruit is blue and seems to have the scaled features and shape of a pineapple, with the typical swirls on the scales. There are six redish stem leaves on top of the fruit with a round triangular shape on each end. 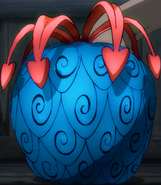