Riku uses this form by absorbing the suns extreme solar heat and energy. This was first seen on Thriller Bark when was enraged at the Mysterious Five for taking the sun from people. He ate the small sun ray peaking through and absorbed it through his body. After the time skip he can use this by absorbing the sun through his body. This form increases his speed and power exponentially. Like Burnout Mode he grows scales under his eyes and on his forearms do deal more damaging attacks. After the Timeskip he can turn his body into pure plasma to turn into a Logia for short periods of time. 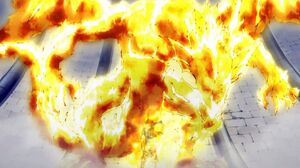 In this form Rku turns into a dragon made of pure superheated plasma. This form looking like his regular form but with no sign of a face just flames.

Retrieved from "https://onepiecefanon.fandom.com/wiki/Tatsu_Tatsu_no_Mi,_Model:_Fire_Dragon/Solar_Mode_Techs?oldid=23396"
Community content is available under CC-BY-SA unless otherwise noted.