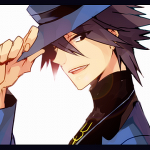 Hey, I am Rukiryo, but just call me Ruki. I am a nerd all on its own, loving anime, manga and video games, but I'm not gonna bore you with my whole backstory, just know that you can always come to me for help.

What My Name Means

Ruki's looks resemble that of a young man. He sports shaggy hair of dark color, long enough for its bangs to reach his nose and likewise, strands of hair to cover the sides of his face all the way to below his shoulders. His attire consists of a red colored shirt and a light colored cape with a pattern of flame that is torn into stripes on the bottom. Shizen also wears light colored trousers that are tied by straps on his thighs and slightly above his ankles, as well as boots of a dark color. He also has red eyes, and prominent canines.

Ryo is apparently a funny guy.. At times. Ryo likes to help a lot being loyal to the One Piece Fanon. He is also fairly annoying as noted by many people but all around fun. He has a temper and gets angry over some things, however do not be afraid of him as he loves to help.

Ryo has the POWER OF THE MIND, WRITING, AND EDITING!!! Which trumps all!

What I Do Here

Oh you know, just sitting on the wikia all day :/. Besides this I'm here to help with Devil Fruit oopsies as well as page probs! Did I just say oopsies and probs?... I need to get a life...

Retrieved from "https://onepiecefanon.fandom.com/wiki/User:Rukiryo?oldid=26557"
Community content is available under CC-BY-SA unless otherwise noted.